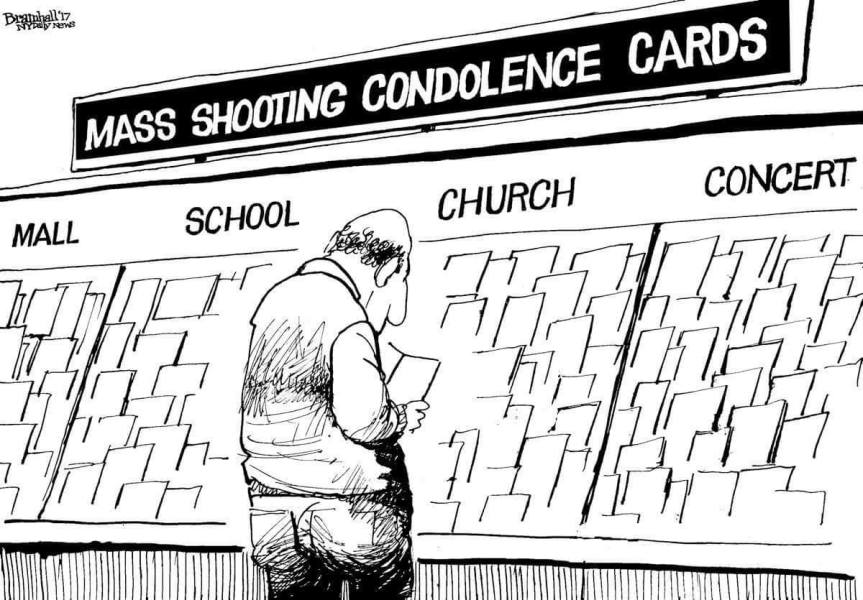 Yesterday, I saw a sticker on a pickup truck that read “God, Country, Guns.”  To me, that sticker made as much sense as “God, Country, Hammers” or “God, Country, Bicycles.”  A gun is just that: a tool, an object, like a hammer or a bicycle, only much more dangerous in the wrong hands.

But many Americans don’t look at guns as tools, as objects, as a deadly technology that requires great care and also strict regulations.  They identify it with God and Country.  They see it as representing certain values, such as freedom and liberty and individuality.  For some men, guns are synonymous with masculinity.  They are symbols of potency.  Of agency.  They are worthy of protection, indeed of a lifelong vow, ’til death do us part.  Hence the catchphrase, “you can have my gun when you pry it from my cold, dead hands.”

This sacralization of the gun, its elevation as a totem of strength and virility, its hugely symbolic presence in American life, is an important reason why gun control efforts largely fail, even in the aftermath of horrendous mass shootings.  Reasoned and reasonable efforts to limit mass shootings, e.g. by banning military-style assault weapons, high-capacity clips, and bump stocks, are no match for people’s emotional — I daresay religious or spiritual — attachment to guns.

I’ve owned guns myself and have enjoyed firing everything from a pellet rifle to a .45-70 and from a .22 pistol to a .44 magnum.  As a historian of technology, I appreciate the history of guns as well as their aesthetic beauty.  (If you go to a gun show or hang around gun owners, you’ll often hear guns described as “beautiful.”)  But my appreciation for guns doesn’t translate to an affection for them.  And in the cause of greater public safety and a reduction in mass shootings, I’d like to see stricter regulations for certain guns and related accessories.

Again, here are three reasonable changes I’d like to see:

Yet, no matter how reasonable these changes seem to most, organizations like the National Rifle Association will oppose them,* as will those who associate guns with God and Country and freedom and similar values.

Growing up in the 1970s, I remember reading “Field and Stream” and “Outdoor Life” (and an occasional “American Rifleman” too).  In the early ’80s, I wrote a paper on the history of hunting in America prior to the U.S. Civil War.  Until fairly recently, gun owners focused mainly on hunting and personal protection, using weapons like bolt-action or lever-action rifles, shotguns, and revolvers.  Rifles that I recall friends talking about or owning were .30-06 or .30-30.  Nobody talked about owning an AR-15 or AK-47 or similar military-style assault rifles with “banana” (high-capacity) clips and bump stocks.

America, of course, is a land of extremes, and one example is today’s gun-rights crowd, which attacks all regulations or restrictions as an assault on their “rights” or “way of life” as articulated in the Second Amendment.  But it didn’t use to be this way.  Indeed, it wasn’t this way when I was a teenager.  How did guns become so venerated, so cherished, so worshiped, in American culture?  So much so that people ride around today with stickers equating gun ownership with God and Country?

As long as our society continues to worship the gun, the more likely it is that we’ll suffer more mass shootings — and indeed shootings in general.

*Yes, in the aftermath of the Vegas Massacre, it’s true the NRA said it wouldn’t oppose “additional regulations” on bump stocks.  Note, however, that no ban is forthcoming from Congress.  The NRA are a savvy bunch…