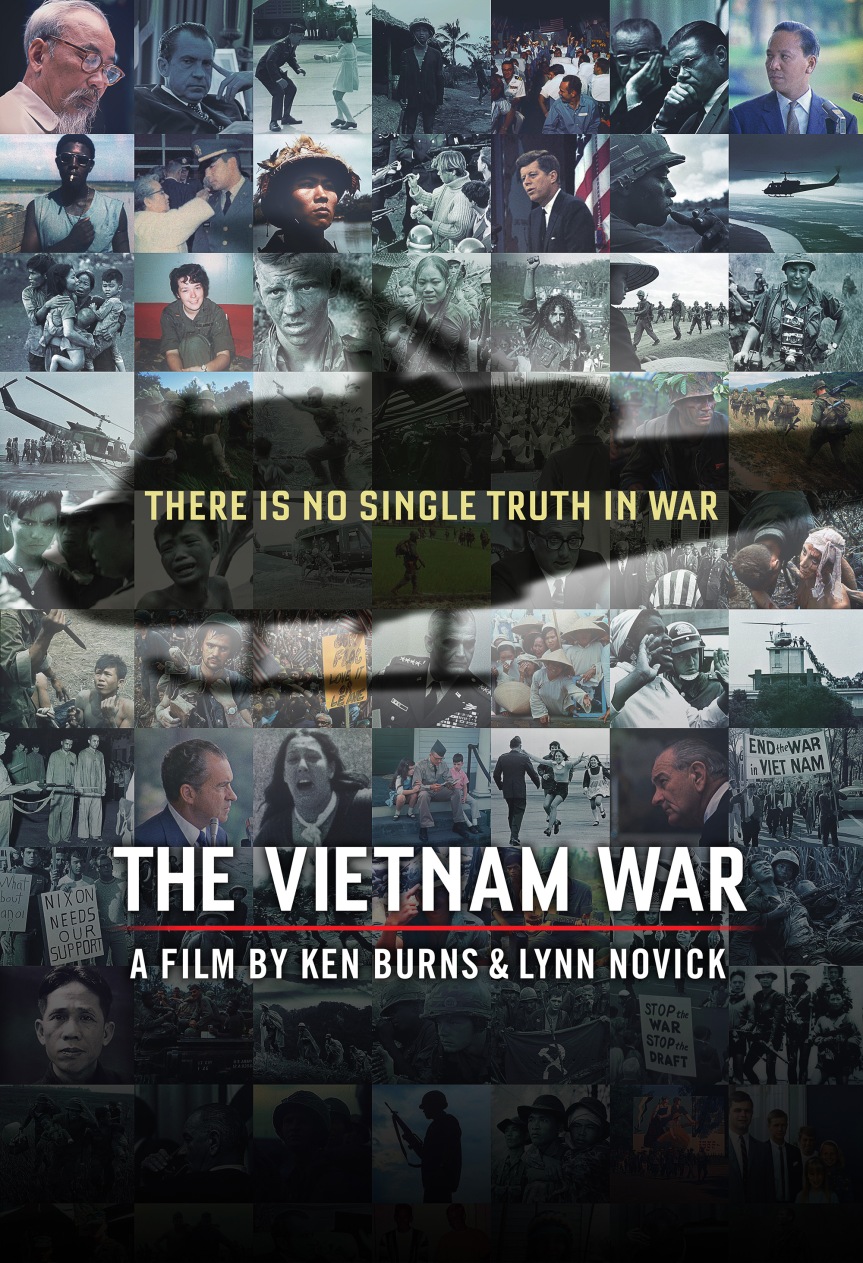 On September 17th, a new TV documentary series on the Vietnam War by Ken Burns (famous for past series on the U.S. Civil War, Baseball, and Jazz, among others) and Lynn Novick begins its run on PBS.  Airing in ten parts over 18 hours, the series promises a comprehensive look at the war from all sides, with the catchphrase “There is no single truth in war” serving as a guiding light.  Initial excerpts suggest the series isn’t looking to provide definitive answers, perhaps as a way of avoiding political controversy in the Age of Trump.

I’ll be watching the series, but I have ten points of my own to make about America’s war in Vietnam.  As a preamble, the Vietnam War (American version) was both mistake and crime. What’s disconcerting in the U.S. media is the emphasis on the war as an American tragedy, when it was truly a horrific tragedy inflicted upon the peoples of Southeast Asia (Vietnamese, Laotians, Cambodians). Yes, American troops suffered and died in large numbers, yet Southeast Asian casualties were perhaps 50 times as great. Along with wanton killing came the poisoning of the environment with defoliants like Agent Orange; meanwhile, mines and unexploded ordnance from the war continue to kill people today in Southeast Asia. In a sense, the killing from that war still isn’t over.

With the caveat that we should reserve judgment until we’ve seen the series, let’s keep these ten points in mind as we watch:

1. To most Americans, Vietnam is a war. And war is a distorting and limiting lens through which to view cultures and peoples. Will Burns recognize this distortion?

2. The series talks about hearing voices from all sides of the conflict. But will the Vietnamese people, together with Laotians and Cambodians, really have as much say as Americans?

3. The U.S. suffered nearly 60,000 troops killed. But Vietnamese killed numbered in the millions. And the destruction to SE Asia — the spread of the war to Laos and Cambodia — was on a scale that rivaled or surpassed the destruction to the American South during the U.S. Civil War. Will that destruction be thoroughly documented and explained?

4. Whose point of view will prevail in the documentary? What will be the main thread of the narrative? Will the war be presented as a tragedy? A misunderstanding? A mistake? A crime? Will the “noble cause” and “stabbed in the back” myths (the ideas that the U.S. fought for freedom and democracy and against communism, and that the U.S. military could have won but was prevented from doing so by unpatriotic forces at home) be given equal time in the interests of a “fair and balanced” presentation? Will these myths be presented as alternative truths of the war?

5. Which American war in Vietnam will be presented? Even when we talk of the American part of the Vietnam War, there were at least four wars. The U.S. Army under General William Westmoreland fought a conventional, search and destroy, war. The Air Force wanted to prove that airpower alone, specifically bombing, could win the war. The Marines were more interested in counterinsurgency and pacification. The CIA and special ops types were engaged in psychological warfare, assassinations, torture, and god-knows-what-else.

6. The American presence in Vietnam became so overwhelming that by 1967-68 the Vietnamese economy was completely distorted. We brought American materialism and profligacy to a nation that was, by comparison, impoverished and “backwards” (from our perspective, of course). Material superiority bred and fed cockiness.

Consider Meredith Lair’s book, “Armed with Abundance: Consumerism and Soldiering in the Vietnam War” (2011).  It details the non-combat experiences of U.S. troops in Vietnam.  Here’s a telling book blurb written by historian Christian Appy: “Meredith Lair’s fascinating analysis of rear-echelon life among American G.I.s dramatically challenges our most common conceptions of U.S. military experiences in Vietnam. From steaks to steambaths, swimming pools to giant PXs, the amenities provided on large bases not only belie conventional images of that war, but also stand as dramatic testimony to the desperate and unsuccessful effort of American officials to bolster flagging troop morale as the war lurched toward its final failure.”

7. Anti-war protests and serious unrest within the U.S. military led to the end of the draft and the creation of an “all-volunteer” military. Has this decision contributed to a more imperial U.S. foreign policy facilitated by a much more tractable military of “volunteers”?

8. Short of nuclear weapons, the U.S. military used virtually every weapon in its arsenal in SE Asia. The region became a test/proving ground for all sorts of weapons and concepts, from “smart” weapons and electronic fences and sensors to horrendous pounding by conventional bombs to war on the environment using defoliants and massive bulldozers to … well … everything. All sorts of pacification theories were tested as well, along with COIN and “small wars” and unconventional tactics to search and destroy to Vietnamization to … well … again, everything. SE Asia became a laboratory and its peoples became lab rats. Will this reality be fully documented?

9. It’s essential that people realize President Richard Nixon and his National Security Adviser, Henry Kissinger, knew the war was a lost cause no later than 1969. (Their conversations on tape prove this.) All they were looking for was a “decent interval” between a peace treaty (“peace with honor”) and what they saw as the inevitable collapse. They got that (in)decent interval of roughly 2.5 years. The Congressional decision to cut off funding to South Vietnam was convenient for the Nixon/Kissinger acolytes, since it allowed them to shift the blame for South Vietnam’s collapse in 1975 to Congress as well as to the usual “suspect” elements in American society, i.e. the peace movement.

Will the duplicity and hypocrisy of Nixon/Kissinger be adequately documented?

10. Finally, an important aspect of the Vietnam War was the breakdown in discipline within the U.S. military, which helped to drive the eventual elimination of the draft. Part of this breakdown was driven by drugs, a trade in which the CIA was implicated. At The Intercept, Jeremy Scahill interviewed Alfred McCoy, who wrote the book on this drug trade. Here’s an excerpt from their recent interview:

Alfred McCoy: And in 1970 and ’71, there were rumors that started coming back from Vietnam, particularly 1971, that heroin was spreading rapidly in the ranks of the U.S. forces fighting in South Vietnam. And in later research, done by the White House, [it was] determined that in 1971, 34 percent, one-third of all the American combat troops fighting in South Vietnam were heavy heroin users. There were, if that statistic is accurate, more addicts in the ranks of the U.S. Army in South Vietnam than there were in the United States.

And so what I did was I set out to investigate: Where was the opium coming from? Where was the heroin coming from? Who was trafficking it? How is it getting to the troops in their barracks and bunkers across the length and breadth of South Vietnam? Nobody was asking this question. Everyone was reporting on the high level of abuse, but nobody was figuring out where and who.

So I started interviewing. I went to Paris. I interviewed the head of the French equivalent of the CIA in Indochina, who was then head of a major French helicopter manufacturing company, and he explained to me how during the French Indochina war from 1946 to 1954, they were short of money for covert operations, so the hill tribes in Laos produced the opium, the aircraft picked it up, they turned it over to the netherworld, the gangsters that controlled Saigon and secured it for the French and that paid for their covert operations. And I said, “What about now?” And he said, “Well I don’t think the pattern’s changed. I think it’s still there. You should go and look.”

So I did. I went to Saigon. I got some top sources in the Vietnamese military. I went to Laos. I hiked into the mountains. I was ambushed by CIA mercenaries and what I discovered was that the CIA’s contract airline, Air America, was flying into the villages of the Hmong people in Northern Laos, whose main cash crop was opium and they were picking up the opium and flying it out of the hills and there were heroin labs — one of the heroin labs, the biggest heroin lab in the world, was run by the commander-in-chief of the Royal Laotian Army, a man whose military budget came entirely from the United States. And they were transforming, in those labs, the opium into heroin. It was being smuggled into South Vietnam by three cliques controlled by the president, the vice president, and the premier of South Vietnam, and their military allies and distributed to U.S. forces in South Vietnam.

And the CIA wasn’t directly involved, but they turned a blind eye to the role of their allies’ involvement in the traffic. And so this heroin epidemic swept the U.S. Army in Vietnam. The Defense Department invented mass urine analysis testing, so when those troops left they were tested and given treatment. And what I discovered was the complexities, the complicity, of the CIA in this traffic and that was a pattern that was repeated in Central America when the Contras became involved in the traffic.

These ten items highlight just some of the complexities of the Vietnam War and its effects throughout Southeast Asia.  How many of these will be tackled honestly in Ken Burns’s new series?  We shall see, beginning in two weeks.

25 thoughts on “Ken Burns and the Vietnam War: Ten Items to Watch For”