Once again, the USA leads the world in weapons sales, notes SIPRI, the Stockholm International Peace Research Institute.  The 100 biggest arms producers accounted for $375 billion in weapons sales in 2016, with US firms having by far the largest share at $217 billion.  That’s right: the US accounts for roughly 58% of the global arms trade. We’re #1!  We’re #1!

Not only do we arm our friends but our foes as well, notes FP: Foreign Policy, which has the following SitRep (situation report) for today:

U.S. weapons used by ISIS. A new report from Conflict Armament Research, a U.K.-based weapons tracking group, outlines in fascinating detail the industrial-scale weapons manufacturing capabilities the Islamic State boasted of in its prime… But what might be most notable are the American-supplied weapons found amid the ruins — the aftermath of secretive American efforts to provide small rebel groups with anti-tank rockets and other guided munitions. The transfer of the rockets, purchased from European countries, violated end-user agreements signed by the United States pledging not to transfer the weapons to third parties. In some cases, it took only a few weeks for the weapons to end up in the hands of Islamic State fighters after being delivered to allegedly friendly forces.

Let’s face it: $217 billion is an enormous amount of money, and the weapons trade is enormously profitable to the US.  America’s wars are not coming to an end anytime soon: there’s simply too much money being made on manufacturing and selling war.

This puts me to mind of observations made by Father Daniel Berrigan, who served prison time for protesting the Vietnam War.  Berrigan wrote with eloquence against war, and his words from a half-century ago are as timely today as they were during the Vietnam protests:

“we are powerless to inquire why it is easier to continue to slaughter than to stop it, why the historical cult of violence has become the mainstay of policy–both foreign and domestic, or why our economy so requires warmaking that perpetual war has united with expanding profits as the chief national purpose.”

And that was when the US still had a manufacturing base for consumer goods that hadn’t withered from “free” trade deals like NAFTA and other globalization efforts.  The global market the US dominates today is not for consumer goods but for wares of destruction.

When you sow the winds of weaponry and war, and profit mightily from it, do you not eventually have to reap the whirlwind of destruction? 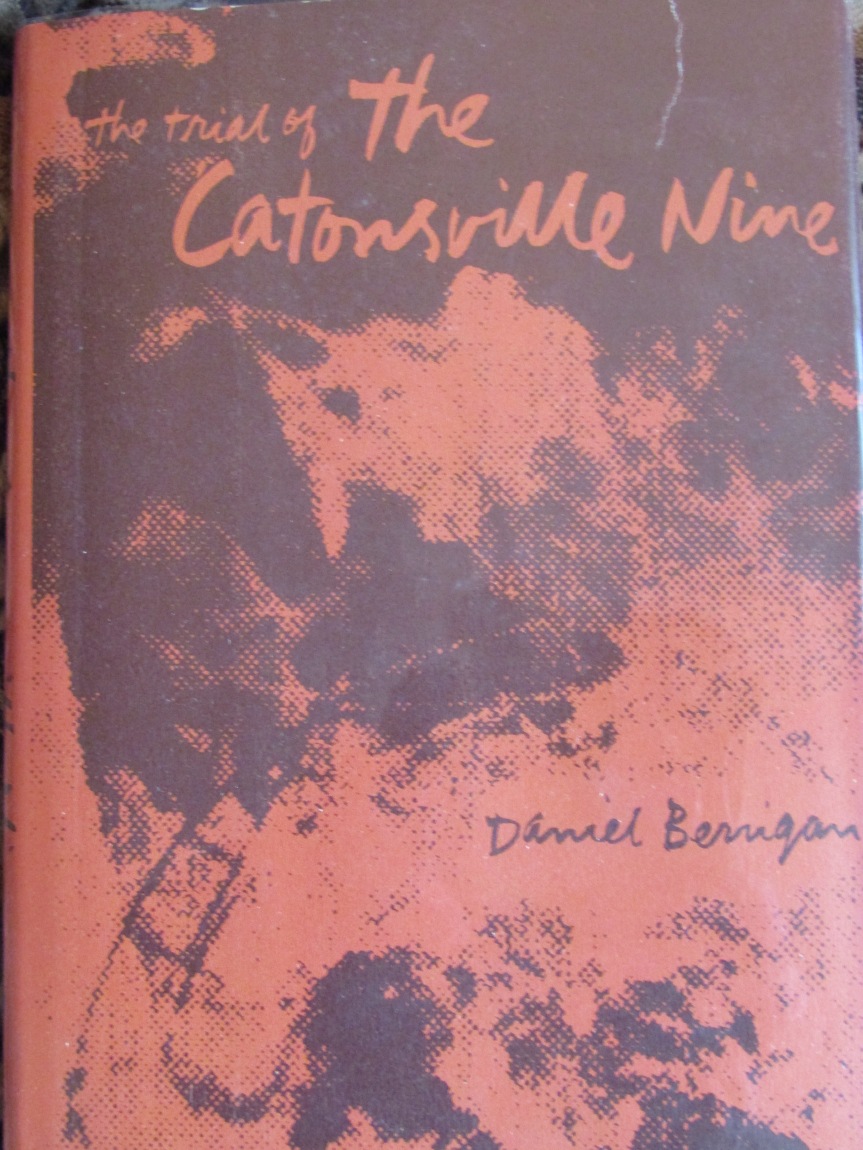 In May 1968, nine Catholic activists set fire to draft records in Catonsville, Maryland, in a deliberate act of sabotage and protest against the Vietnam War.  For the crime of destroying government property, a crime they freely admitted, they were tried in federal court in Baltimore and found guilty.  I’ve been reading the edited trial transcript (with commentary) by Daniel Berrigan, one of the Catonsville Nine and a Catholic priest.  What unified these nine people was their moral opposition to the Vietnam War, a moral revulsion to the acts their country was committing in Vietnam, a revulsion that drove them to burn draft records with a weak brew of homemade napalm so as to gain the attention of their fellow citizens.

Question from the Judge: But they did respond to you, did they not?

Thomas Lewis: It was an atrocious response.

Question from the Judge: You say your intention was to save these children, of the jury, of myself, when you burned the [draft] records?  That is what I heard you say.  I ask if you meant that.

I meant that
of course I mean that
or I would not say it
The great sinfulness
of modern war is
that it renders concrete things abstract
I do not want to talk
about Americans in general ….
I poured napalm [on the draft records]
on behalf of the prosecutor’s
and the jury’s children

When at what point will you say no to this war?
We have chosen to say
with the gift of our liberty
if necessary our lives:
the violence stops here
the death stops here
the suppression of truth stops here
this war stops here
Redeem the times!
The times are inexpressibly evil
Christians pay conscious … indeed religious tribute
to Caesar and Mars
by the approval of overkill tactics … by brinksmanship
by nuclear liturgies … by racism … by support of genocide
They embrace their society with all their heart
and abandon the cross
They pay lip service to Christ
and military service to the powers of death
And yet … and yet … the times are inexhaustibly good
solaced by the courage and hope of many
The truth rules … Christ is not forsaken …

At the end of the trial, as all nine defendants were found guilty, a “member of the audience” cried, “Members of the jury, you have just found Jesus Christ guilty.”

That last statement, and the words of the Catonsville Nine, give us much to ponder on this Easter Weekend.