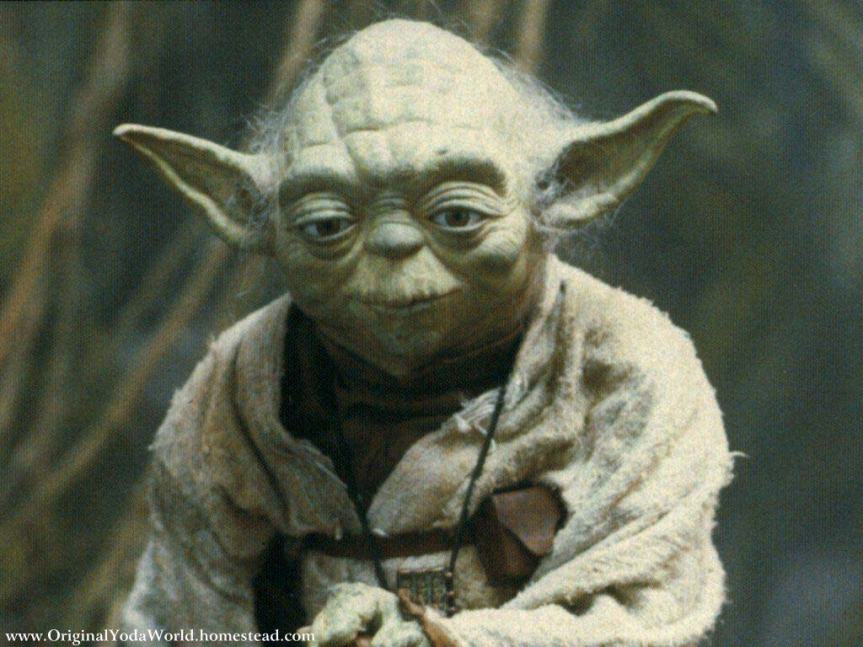 President Trump claims the USA is being invaded.  “Masses of illegal aliens” are going to “overrun” America.  “Giant” caravans.  Bad people from Central America.  Fear them!

Isn’t it amazing that a nation of over 300 million people — which claims to have “the world’s finest fighting force” in all of history — fears an “invasion” by a few thousand desperate people, mainly women and children, who most likely would be happy cleaning toilets and doing other jobs that most Americans believe are beneath them?

This election cycle seems like a gloss on the “The Empire Strikes Back,” with the Dark Side of the Force triumphing on the Republican side.  As Yoda the Jedi Master put it, “anger, fear, aggression.” They are “quicker, easier, more seductive” than the good side.

Trump and his minions know this.  They know what stirs up his base and drives them to the polls to vote.

Trump is more opportunistic grifter than evil Sith Lord, but he’s stirring up anger, fear, aggression among voters to sustain his power.

Is the Dark Side stronger?  We’ll soon see.

Update (11/4/18): A U.S. military report suggests that most of the several thousand people currently in the caravan in Mexico are unlikely to reach the U.S. border.  To face down the roughly one thousand people who are likely to reach the border and apply legally for asylum, Trump is deploying roughly 15,000 troops while threatening that rock-throwers will be met by Army bullets.

President Franklin Delano Roosevelt famously told Americans that the only thing they had to fear is fear itself.  However, recent American presidents have encouraged us to fear everything.  Let’s not forget the stoking of fear by people like Condoleezza Rice and her image of a smoking gun morphing into a nuclear mushroom cloud.  That image helped to propel America into a disastrous war in Iraq in 2003 that festers still.

One of the most powerful scenes I’ve seen in any movie came in the adaptation of George Orwell’s 1984.  The film version begins with the “two minutes of hate” directed against various (imagined) enemies.  Check it out.  Doubleplusgood!

Especially disturbing is the rant against Goldstein, the enemy within.  Here I think of Donald Trump claiming that the Democrats are anti-military for not rubberstamping his budget, a dishonest as well as ridiculous charge, since both parties support high military spending.  Indeed, high Pentagon spending is the one bipartisan area of agreement in Congress.

This is among the biggest problems in America today: the stoking of hate against the enemy within, e.g. “illegal” immigrants (rapists, gang members, killers, according to our president), Democrats who allegedly don’t support our military, rival politicians who should be “locked up,” protesters who should be punched and kicked and otherwise silenced, high school students who are dismissed as phonies and professional actors, and on and on.

Irrational fear is nothing new to America, of course.  Consider the fear of communism that produced red scares after World Wars I and II.  Consider how fears of the spread of communism led to criminal intervention in Southeast Asia and the death of millions of people there.  Massive bombing, free-fire artillery zones, the profligate use of defoliants like Agent Orange, the prolongation of war without any regard for the suffering of peoples in SE Asia: that behavior constituted a crime of murderous intensity that was in part driven by hatred and fear.

And when hatred and fear are linked to tribalism and a xenophobic form of patriotism, murderous war becomes almost a certainty.  When the zealots of hate are screaming for blood, it’s very hard to hear appeals for peace based on compassion and reason.

Anger, fear, aggression: that way leads to the dark side, as Yoda, that Jedi master, warned us.  Hate too, Yoda says, must be resisted, lest one be consumed by it.  Sure, he’s just an imaginary character in the “Star Wars” universe, but that doesn’t negate the truth of his message.

God is love, the Christian religion says.  Why then are we so open to hate and fear?

History may not repeat itself, but it sure does echo – often loudly.  That’s the theme of Tom Engelhardt’s new article, “Tomorrow’s News Today: Writing History Before It Happens.”  Tom comes up with nine headlines that we’ve seen before, and that (sadly) we’re likely to see again — and again.  Here, shortened, are his nine “future” headlines:

You can read all of Tom’s article here.   Perhaps the most sobering aspect of his article is how readily predictable (and repetitive) such headlines are.  Toddlers shooting parents and siblings?  Sadly predictable due to the proliferation of guns and lack of safety measures.  Whistleblowers charged with espionage?  The next Snowden or Manning should be ready to be so charged, even when (especially when) their motives are focused on informing ordinary Americans of what their government is up to.

Inspired by Tom’s article, I came up with seven grim “future” headlines of my own.  I challenge our readers to come up with a few as well.  Just add them to the “Comments” section below.

This is not simply a whimsical or cynical exercise: it’s a reminder of how narrow our country’s narrative appears to be, both now and in the immediate future.  Details change, a name here, a country there, but the headlines remain the same.  We need to act to change these headlines.

Always in motion the future, as Yoda said.  Let’s hope that a change for the better is not something that’s limited to “Star Wars” movies.

A recent article at NBC News is unusual in that it highlights the awfulness of war even when the killing is “surgical” and done by drones.  Brandon Bryant, a former drone operator for the Air Force, suffers from PTSD and feels that killing by drone caused him to lose respect for life, that he became like a sociopath.  Especially upsetting to Bryant was when his commander gave him a “diploma” (most likely an award citation) that stated he had contributed to the deaths of 1,626 people.

Drone strikes are basically extra-judicial death sentences from the sky.  For Americans, they seem unproblematic because we’re not exposed to them and because our government tells us only “militants” and evil-doers are being killed.

But the temptations of drone warfare are considerable, as I wrote in an article for Truthout in August 2012.  Here’s what I said back then:

What happens when we decouple war’s terrible nature from its intoxicating force? What happens when one side can kill with impunity in complete safety? General Robert E. Lee’s words suggest that a nation that decouples war from its terrors will likely grow too fond of it. The temptation to use deadly force will no longer be restrained by knowledge of the horrors unleashed by the same.

Many Americans seem happy that we can smite foreign “militants” at no risk to ourselves. They trust that our military (and the CIA) rarely misidentifies a terrorist, and that “collateral damage,” that mind-numbing euphemism that obscures the reality of innocent men, women, and children obliterated by missiles, is the regrettable price of keeping America safe.

But the reality is that sloppy intelligence and the fog and friction of war combine to make seemingly antiseptic drone warfare much like all other forms of war: bloody, wasteful, and terrible. Terrible, that is, for those on the receiving end of American firepower. Not terrible for us.

There is a real danger that today’s drone warfare has become the equivalent to the Dark Side of the Force as described by Yoda in The Empire Strikes Back: a quicker, easier, more seductive form of terror. It is indeed seductive to deploy the technological equivalent of Darth Vader’s throat-constricting powers at a safe distance. We may even applaud ourselves for our prowess while doing so. We tell ourselves that we are killing only the bad people, and that the few innocents caught in the crosshairs constitute an accidental but nonetheless unavoidable price of keeping America safe.

In light of America’s growing affection for drone warfare combined with a disassociation from its terrible results, I submit to you a modified version of General Lee’s sentiment:

It is not well that war grows less terrible for us – for we are growing much too fond of it.