Editor’s Note: Jeremy Scahill, author of “Dirty Wars,” minces no words in his reaction to Trump/Clinton and their second “debate.”  Scahill’s article appeared originally at The Intercept.

Trump may go away, but the people he has empowered will not 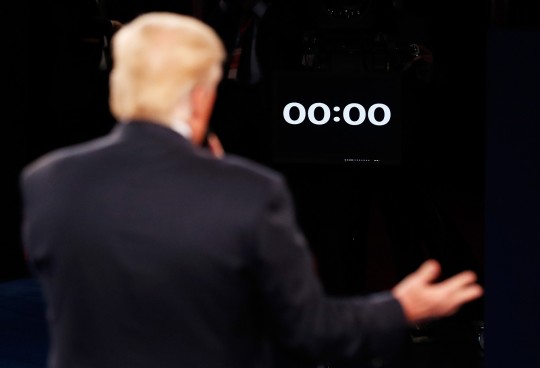 These presidential debates — certainly this one — serve as the most stark commentary on how bankrupt the U.S. electoral system is.

This is the choice the system produces for “viable” candidates.

The cartoonish villainy of Donald Trump is a major factor in distracting attention from the hawkish, neoliberal policies of Hillary Clinton. Hillary’s best selling point for a lot of people — Democrats and, increasingly, Republicans — is: I’m not batshit crazy like Trump.

There is rarely a focus on Clinton’s embrace of regime change, her role in creating the conditions, as secretary of state, for the horror show currently unfolding in Yemen, or her paramilitarization of the State Department. Clinton has never been asked about her role in the secret drone “kill chain” the Obama administration has now codified as a parallel justice system, where there are no trials, indictments, or convictions, but a whole lot of death sentences. Just as Clinton avoided real questions about Libya thanks to the clownfuck Republicans’ carnival over Benghazi, she emerges as the only choice for many sane people. That she is buddy-buddy with Wall Street, speaks one way to them and another way in public, becomes a footnote. She is the empire candidate and that is why the John Negropontes and Max Boots and George H.W. Bushes of the world have embraced her.

Here is the thing, though: Both Clinton’s and Trump’s candidacies have fucked us — albeit in different ways. Hillary represents more of the same bipartisan warmongering. And, under Obama, that has been met with a lot of silence and complicity from liberals. Depressing.

Whether Trump wins, loses, or loses big, he has empowered fascists, racists, and bigots. He did not create them, but he has legitimized them by becoming the nominee and openly expressing their heinous, hateful beliefs. This, to me, is one of the most frightening developments on a domestic level in the U.S. this election cycle. Trump may go away, but the people he has empowered will not.

In a notorious night raid near Gardez in Afghanistan in February 2010, a US Special Ops team apparently hit the wrong suspect’s house, resulting in the deaths of innocents to include pregnant women.  It was further alleged that US troops dug bullets out of the bodies of these women.  Jeremy Scahill’s recent article at The Intercept reviews the US military’s investigation into these allegations, an investigation that cleared the troops involved of any wrongdoing.  Scahill’s article is here and warrants careful reading.

I want to focus on a piece of evidence that Scahill obtained: the U.S. military’s evaluation of the Afghan province and its after-action report about the failure of its IO (information operations) “battle.”  Here is the document in question:

First, I want to focus on the BLUF at the bottom right.  In the Army, it stands for bottom line up front.  Most senior commanders will read this first; in some cases, the BLUF will be all they read (and remember).  What does the BLUF conclude?

It says the US military “lost the IO battle in our silence,” and that it’s only getting worse as the military remains silent.  It sounds vaguely reassuring: at least the military realizes it bungled the “information operations” job.  But it’s a bureaucratic message in bureaucratic language.  It reduces the objective to winning the “information” war, which the military says it’s not winning because of poor coordination with Afghan and other forces, lack of responsiveness, and so on.

How about some honesty?  Here’s my BLUF:  The US military is losing because it often misidentifies the enemy and misunderstands the culture, leading to the deaths of innocents and the estrangement of even those Afghans who are initially open to American influence.  And no matter how hard you try to spin those facts, you can’t hide that cold truth from the Afghan people.  (You can hide it from the American people, but that’s another story.)

As General Stanley McChrystal himself said about Afghanistan in 2010:  “We have shot an amazing number of [Afghan] people [often at checkpoints], but to my knowledge, none has ever proven to be a threat.”

Tell me again how you win “information operations” by shooting “an amazing number” of innocent people?

I want to focus on a second aspect of the US military’s document from Scahill’s article: the illusion of data substituting for real knowledge.  Here’s the document again:

Look at the left column.  It has “atmospherics” for the province, to include percentages for literacy, support for the Taliban and Al Qaeda (as if those are fixed in place), access to radio and telephone, and so on.  Is this knowledge?  Or a masquerade for it?

Interestingly, a quarter of the people are viewed as hostile to the USA.  One assumes this percentage went up significantly after the raid in question.

My point is these maps and charts and slides give an illusion of data-driven competence, but when you read Scahill’s article, you realize American forces were totally ignorant of basic Afghan customs, such as rituals to prepare bodies for burial.  That ignorance seems to have driven the initial confused and inaccurate account of honor killings of females, an account that was repeated widely (and wrongly) in the Western media.

Another minor yet telling point: An unnamed Ph.D. describes some of the Afghan peoples of the region as “great robbers” and “utter savages.”  Think about how that description would color the attitudes of US troops assigned to the region.  “Here we go, men.  Time to kill us some robbers and savages.”

Scahill’s article and the document he provides is a microcosm of the wider failure of US operations in Afghanistan.  The war, already in its 15th year, promises to be never-ending unless and until the US finally withdraws.  In a profile not of courage but of pusillanimity, Obama has punted the decision to the next president, which doubtless means another 2-4 years of war, mistakes and misunderstandings and more deaths of innocents included.

When will the madness end?

Jeremy Scahill is a reporter for whom the word “intrepid” may have been invented. He’s been remarkably bold in covering the creation of private mercenary forces in the United States (as documented in his bestseller, Blackwater) as well as America’s “turn to the dark side” after 9/11/2001, which led to “wars of choice” in Iraq and Afghanistan, together with interventions in Somalia, Yemen, and across the world in the name of combating terrorism. Indeed, the subtitle of Scahill’s new book is “The World Is A Battlefield.” And since there’s always a terrorist organization at large somewhere in the world, we are ensured of a forever war, a grim prospect on this Veterans Day.

I’ve written an extended review of Scahill’s Dirty Wars at Michigan War Studies Review, edited by the incomparable Jim Holoka.  An aspect of this review I’d like to focus on is the use of macho language by Bush Administration operatives soon after 9/11.  A strength of Scahill’s account is his ear for the tough talk of civilians within the administration, most of whom had no military experience.

In the days and weeks following 9/11, L. Paul Bremer, later to become the head of the Coalition Provisional Authority in Iraq, wrote of the Clinton’s Administration’s “limp-wristed” approach to terrorism.  Cofer Black, Bush’s head of counter-terrorism, talked of “taking the gloves off” as well as of “unleashing the junkyard dog” of CIA and special operations forces against terrorist networks.  Perhaps the most telling attempt at tough-talk came from the lips of Jose Rodriguez, Director of Operations at the CIA, who said it was time for “everybody in the government to put their big boy pants on and provide the authorities what we [the CIA] needed [to take action].” [Emphasis added.]

Here Scahill quotes Malcolm Nance, a career counterterrorist expert for the U.S. Navy, as describing Cofer Black and his fellow tough-guys as “civilian ideologues” who embraced “Tom Clancy Combat Concepts” that consisted of “going hard, … popping people on the streets, … dagger and intrigue all the time.”  Tom Clancy might make for decent Hollywood action movies, but it’s never a good idea to confuse fantasy with reality.

There’s much more to Scahill’s book (and the documentary that accompanies it, also named “Dirty Wars”) than this, and I urge you to read it.  Its major theme is the abuse of power by the U.S. government and the erosion of Constitutional safeguards and freedoms, all justified in the name of “keeping us safe.”  But one of its minor themes is the macho posturing of men with little or no experience in the military who were all too willing to order others to fight in their name.

Yes, they all put on the “big boy pants” — figuratively speaking. They sat in offices and ordered young troops into battle.  And I’m sure they signed those orders with bare knuckles and firm wrists.  In so doing they risked nothing and gained, at least in their own minds, a reputation for toughness.

Far too often in the history of war have old men believed that, by sending others off to fight and die, they were putting on the big boy pants. The costs of such macho posturing have been, and continue to be, far too high.