It’s staggering the number of people dying in America in ways that are preventable. Here’s a quick summary, courtesy of Blake Fleetwood at Scheerpost:

When you start adding these numbers, you reach a grim conclusion: Americans are killing themselves and others at record rates. Grimmer still are the numbers from the Covid-19 pandemic, which in the U.S. has killed more than a million people. Estimates suggest that a true national health care system could have reduced this number by 300,000 (!), but there’s no interest among Democrats or Republicans to create such a system. Our politicians, corrupted by money from the health care “industry,” Big Pharma, etc., have no interest in saving lives (or even saving money, since a national health care system would save trillions over time).

Is it any wonder why the U.S. government embraces violence with such zeal? If you can’t care for your own people, why should you care at all for other peoples, such as in Yemen or Ukraine? What matters is profit from selling weapons, whether in the U.S., awash in assault rifles and other guns, or overseas with massive arms sales or shipments to Saudi Arabia and Ukraine, among others.

Violence or the threat of violence can be enormously profitable to those who deal in it.

Last night, I was watching baseball and saw an advertisement for a new show. In one 30-second clip, I saw several assault rifles and a gun battle, with a few handguns thrown in for good measure. We are assaulted constantly by such imagery, so much so that gun violence is seen as “normal” because it has become our new normal. Hence the gruesome spike in mass shootings across America.

Way back in the early 1980s, I had a sticker that read “NRA Freedom.” Remarkably, “freedom” in America has become synonymous with having guns everywhere, more than 400 million of them. Other freedoms, such as freedom of speech, freedom of the press, and freedom of assembly, are being curtailed and eroded with barely a complaint, but any attempt to make it slightly more difficult for a few people to buy guns is instantly opposed.

A culture of freedom is increasingly a cult of death. And as the Outlaw Josey Wales said, “Dyin’ ain’t much of a living.” Time to learn from Josey.

Ten mass shootings happened across the nation this weekend, leaving at least seven people dead and more than 40 injured. It was the latest in a streak of violent weekends in America. The weekend before this, there were also 10 mass shootings that left 12 people dead across seven states. (CNN defines a mass shooting as four or more people shot, not including the shooter.) This weekend’s violence included shootings at several parties and celebrations, including in California, Indiana and Colorado. According to the Gun Violence Archive, there have been 293 mass shootings in 2021 so far.

After death by gun, we have death by vehicles on America’s roads:

38,680: That’s how many people died in motor vehicle crashes in 2020, according to estimates from the National Highway Traffic Safety Administration. That’s the largest projected number of deaths since 2007, despite a 13.2% decrease in miles traveled from the prior year.

And of course the Covid-19 death toll has surpassed 600,000 in the United States (one study suggests the true Covid death toll is over 900,000), with the Trump administration having rejected any responsibility for its botched response to the pandemic. Most Trump supporters seem content with the notion that, well, at least Trump tried to do, well, something, like blaming the Chinese for “Kung Flu.” Sadly, Trump’s “gifts” of bluster and boasting and bragging and bombast just had no effect on a deadly virus.

At this site, I often marvel at how Americans have so little knowledge of or interest in America’s wars overseas and the deaths and suffering they produce. But the hard truth is that we also tend to ignore mass death here in the USA, whether from guns or motor vehicles or lack of affordable health care. Indeed, I’ve seen estimates to suggest that perhaps half of America’s deaths from Covid could have been prevented if our country had a national health care system. But we’d rather die from kleptocratic capitalism (in the name of freedom) than live with democratic socialism.

I don’t think America has a death wish — but we sure could use a lot more emphasis on life and living. Readers, what say you? 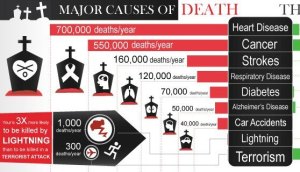 Over the last ten years in the United States, more than 280,000 Americans (more than 300,000 by some counts) have died because of guns.  Over that same period, roughly 350,000 Americans have died on the roads in vehicular accidents.  That’s roughly 630,000 Americans dying every decade either in road accidents or by gunshots, which is roughly the number of Americans who died in the horrible carnage of the U.S. Civil War from 1861 to 1865, America’s bloodiest war.

In other words, at the hands of guns and vehicles, Americans suffer the equivalent of a civil war-like bloodletting each and every decade.  Is it time to declare war on guns and cars?  (And now roughly 30,000 people each year are dying from drug overdoses related to the abuse of prescription painkillers and other opiates.)

The U.S. media and our leaders prefer to fixate on radical Islamic terrorism, which has accounted for 24 deaths over the same period.  Indeed, by the numbers the White supremacist threat to America is twice as serious as threats from ISIS or other external radical groups.

According to the Washington Times,

“In the 14 years since the Sept. 11 terror attacks, nearly twice as many people have been killed in the United States by white supremacists and anti-government radicals than by Muslim jihadis, according to a new study.”

“White supremacists and anti-government radicals have killed 48 Americans … versus 26 killings by Muslim radicals, according to a count by New America, a Washington research center.”

“New America program associate David Sterman said the study shows that white supremacy and anti-government idealists are a major problem, that their growth rate needs to be addressed and that there is an ‘ignored threat’ woven in the fabric of American society.”

Given these numbers and realities, why are America’s leaders so fixated on hyping the threat of radical Islamic terrorists?  Shouldn’t we be focusing on saving lives on our roads? Reducing gun accidents and gun crimes and suicide by guns? On reducing hate-filled radicalism within our own country?

We should be, but we’re not.  Our leaders prefer threat inflation: They believe in making political hay while the foreign terrorist threat shines.  So presidential candidates like Jeb Bush and Marco Rubio predictably call for a war on terrorism, for military “boots on the ground” in Syria and Iraq, and (of course) for higher military spending and more surveillance, in the name of protecting America.  Threat inflation knows no political party, of course, with Hillary Clinton joining the chorus of the tough-talkers against terror.

Threat inflation sells.  And threat inflation pays.  This is an important theme in Tom Engelhardt’s latest tour de force at TomDispatch.com, “The National Security State’s Incestuous Relationship with the Islamic State.”  As Engelhardt notes, threat inflation drives a dance of death even as it eliminates grey zones — opportunities for dialog, diplomacy, compromise, forms of accommodation.  It enforces a black and white world of crusaders and jihadists bent on killing one another in the name of righteousness.

Here is how Engelhardt puts it:

the officials of [the U.S. national] security state have bet the farm on the preeminence of the terrorist “threat,” which has, not so surprisingly, left them eerily reliant on the Islamic State and other such organizations for the perpetuation of their way of life, their career opportunities, their growing powers, and their relative freedom to infringe on basic rights, as well as for that comfortably all-embracing blanket of secrecy that envelops their activities.  Note that, as with so many developments in our world which have caught them by surprise, the officials who run our vast surveillance network and its staggering ranks of intelligence operatives and analysts seemingly hadn’t a clue about the IS plot against Paris (even though intelligence officials in at least one other country evidently did).  Nonetheless, whether they see actual threats coming or not, they need Paris-style alarms and nightmares, just as they need local “plots,” even ones semi-engineered by FBI informers or created online by lone idiots, not lone wolves. Otherwise, why would the media keep prattling on about terrorism or presidential candidates keep humming the terror tune, and how, then, would public panic levels remain reasonably high on the subject when so many other dangers are more pressing in American life?

The relationship between that ever-more powerful shadow government in Washington and the Islamic terrorists of our planet is both mutually reinforcing and unnervingly incestuous.

Of course, Engelhardt knows that terrorism must be fought.  The point is not to lose our collective heads over the (much exaggerated) threat of it.  To cite Frank Herbert’s insight in Dune, “Fear is the mind-killer.”  Yet our media and leaders seem determined to hype fear so as to kill our minds.

As our media and politicians stoke our fear by exaggerating the threat posed by terrorism, ask yourself to what purpose are they attacking your minds.

Hint: It certainly isn’t about keeping you safe.