At one time, not too long ago, a great symbol of America was the Statue of Liberty.  She lit her torch to guide immigrants yearning to breathe free.  America saw itself as the land of liberty, the land of opportunity, open to (nearly) all, even to the most humble and most desperate.

And there was, I think, some truth to these symbols and myths.  My father’s parents, immigrants from Italy, came to America prior to World War I.  My mother’s ancestors came earlier, of English and Swedish ancestry, also seeking the promise of America.  Sure, the streets weren’t paved with gold; sure, my parents ended up working in a factory for low wages, but that’s also where they met, and eventually my dad did earn a civil service job as a firefighter that lifted my family into the lower end of the middle class.

Unless you’re Native American, we’re all recent immigrants to America, some of us forcefully brought here against our will, most notably African slaves.  Despite all the harsh realities of U.S. history, such as periodic bouts of anti-immigrant fervor, the inhumanity of slavery, murderous labor strife, and so forth, America nevertheless had an ideal, however imperfectly realized, of openness.  Of newness, freshness, inclusiveness.

But that ideal, in decline, I believe, since the 1950s and the creation of the permanent war state, is now dead.  America today is the land of walls and wars, a land of “Keep Out” signs.  A fortress mindset prevails today, a lockdown mentality, justified in the name of safety and security, to keep “them” out.  You know: the undesirables of the moment.  Mexicans.  Muslims.  “Foreigners.”  Maybe, in the future, you.

All this is on my mind as I’m reading Greg Grandin’s insightful new book, “The End of the Myth: From the Frontier to the Border Wall in the Mind of America.”  Grandin traces the idea of frontiers in America and more generally the idea of limits.  I was struck again while reading his book of Ronald Reagan’s sunny optimism: his talk of there being no limits in America, his rejection of border walls, even his encouragement of immigrant labor and visas, calculated though such positions were (i.e. winning more of the Hispanic vote in key states like Texas). 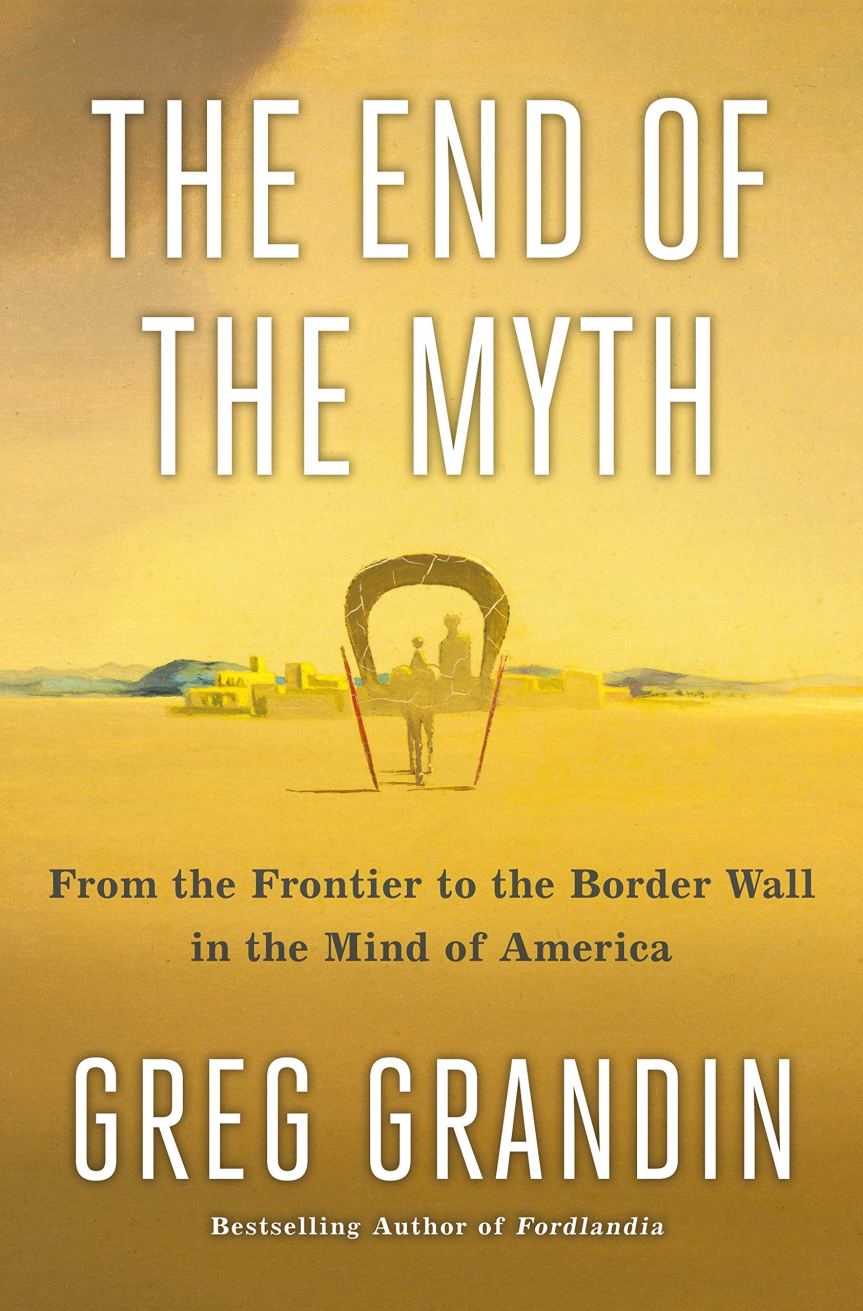 Forget about “It’s morning again in America,” a slogan under Reagan.  Under Trump, it’s crime, it’s gangs, it’s drugs, it’s bad hombres pouring over the border, bringing death and mayhem to America.  Only walls and weapons can stop them.  I was struck by a reference Grandin makes at the end of his book to Trump saying that barbed wire “can be a beautiful sight” when it’s used on America’s southern border to keep out asylum seekers from Central America.  I remember spacious skies, amber waves of grain, and purple mountain majesties being sung about as beautiful in my youth, but not barbed wire or Trump’s big “beautiful” wall.

When did it all go wrong?  Grandin provocatively connects America’s failing wars and fading empire to its fortress- and prison-favoring mentality today.  You might call it the real closing of the American mind.  And perhaps the shuttering of our hearts as well as our minds.  Grandin doesn’t mince words about America today: “But it’s hard to think of a period in the nation’s history,” he writes, “when venality and disillusionment have been so sovereign, when so many of the country’s haves have nothing to offer but disdain for the have-nots.”

I’ve just begun to plumb the meanings of Grandin’s book, which is another way of saying its lessons run deep.  In this America that I live in today, a land in which big walls are celebrated to keep the huddled masses out, a land constantly and needlessly at war around the globe, a land defined more and more by a fortress mentality rather than one that favors liberty, I find myself increasingly estranged, even lost.

Greg Grandin has a new book on Henry Kissinger and a new article at TomDispatch.com.  Kissinger, writes Grandin, had an affinity (or perhaps an avidity) for power, especially air power, as a way of demonstrating his (and America’s) resolve.

Henry Kissinger is, of course, not singularly responsible for the evolution of the U.S. national security state into a monstrosity. That state has had many administrators. But his example — especially his steadfast support for bombing as an instrument of “diplomacy” and his militarization of the Persian Gulf — has coursed through the decades, shedding a spectral light on the road that has brought us to a state of eternal war …

Kissinger was very hands-on. “Strike here in this area,” Sitton recalled Kissinger telling him, “or strike here in that area.” The bombing galvanized the national security adviser. The first raid occurred on March 18, 1969. “K really excited,” Bob Haldeman, Nixon’s chief of staff, wrote in his diary. “He came beaming in [to the Oval Office] with the report.”

In fact, he would supervise every aspect of the bombing. As journalist Seymour Hersh later wrote, “When the military men presented a proposed bombing list, Kissinger would redesign the missions, shifting a dozen planes, perhaps, from one area to another, and altering the timing of the bombing runs… [He] seemed to enjoy playing the bombardier.” (That joy wouldn’t be limited to Cambodia. According to Washington Post reporters Bob Woodward and Carl Bernstein, when the bombing of North Vietnam finally started up again, Kissinger “expressed enthusiasm at the size of the bomb craters.”) A Pentagon report released in 1973 stated that “Henry A. Kissinger approved each of the 3,875 Cambodia bombing raids in 1969 and 1970” — the most secretive phase of the bombing — “as well as the methods for keeping them out of the newspapers.”

All told, between 1969 and 1973, the U.S. dropped half-a-million tons of bombs on Cambodia alone, killing at least 100,000 civilians. And don’t forgetLaos and both North and South Vietnam. “It’s wave after wave of planes. You see, they can’t see the B-52 and they dropped a million pounds of bombs,” Kissinger told Nixon after the April 1972 bombing of North Vietnam’s port city of Haiphong, as he tried to reassure the president that the strategy was working: “I bet you we will have had more planes over there in one day than Johnson had in a month… Each plane can carry about 10 times the load [a] World War II plane could carry.”

As the months passed, however, the bombing did nothing to force Hanoi to the bargaining table.  It did, on the other hand, help Kissinger in his interoffice rivalries. His sole source of power was Nixon, who was a bombing advocate. So Kissinger embraced his role as First Bombardier to show the tough-guy militarists the president had surrounded himself with that he was the “hawk of hawks.” And yet, in the end, even Nixon came to see that the bombing campaigns were a dead end. “K. We have had 10 years of total control of the air in Laos and V.Nam,” Nixon wrote him over a top-secret report on the efficacy of bombing, “The result = Zilch.” (This was in January 1972, three months before Kissinger assured Nixon that “wave after wave” of bombers would do the trick).

During those four-and a half years when the U.S. military dropped more than 6,000,000 tons of bombs on Southeast Asia, Kissinger revealed himself to be not a supreme political realist, but the planet’s supreme idealist.  He refused to quit when it came to a policy meant to bring about a world he believed heought to live in, one where he could, by the force of the material power of the U.S. military, bend poor peasant countries like Cambodia, Laos, and North Vietnam to his will — as opposed to the one he did live in, where bomb as he might he couldn’t force Hanoi to submit. As he put it at the time, “I refuse to believe that a little fourth-rate power like North Vietnam does not have a breaking point.”

In fact, that bombing campaign did have one striking effect: it destabilized Cambodia, provoking a 1970 coup that, in turn, provoked a 1970 American invasion, which only broadened the social base of the insurgency growing in the countryside, leading to escalating U.S. bombing runs that spread to nearly the whole country, devastating it and creating the conditions for the rise to power of the genocidal Khmer Rouge…

Bombing for Kissinger was a way to show he was tough within an inner circle around Nixon that put a premium on toughness. It was also a way to minimize casualties to Americans while demonstrating a total disregard for casualties among the peoples of Southeast Asia.

Kissinger the bombardier was seduced by the seemingly god-like potential of air power — the ability to strike from on high, to smite evil-doers and those who would thwart Kissinger’s designs.  Best of all, Kissinger never had to bloody his own hands. (Can you imagine Kissinger in a knife fight?  Of course not.  But you can imagine him gleefully gushing over bombing reports and bomb craters as bomber jets knifed through the sky.)

There’s a “Star Trek” episode in which Captain Kirk says, “Above all else, a god needs compassion.”  Kissinger the “air power god” had no compassion.  It was all about power.  The little people who refused to kowtow to him — the Vietnamese, the Cambodians, the Chileans, and so on — these people were simply abstractions for Kissinger.  Put differently, they were pawns on the geopolitical chessboard, to be sacrificed at will by self-styled grandmasters like Kissinger.

In his book “Secrets,” Daniel Ellsberg captured Kissinger’s blithe disregard for the lives of others in a probing question about Vietnamization.  Was it moral, Ellsberg asked, to turn the war over to the South Vietnamese, knowing they were going to incur high casualties while fighting North Vietnam, even as American troops withdrew?  Kissinger had no answer, one senses because the morality of his policies didn’t much matter to him.  The goal was to save America’s “face” in Vietnam; for Kissinger the fates of the peoples of Southeast Asia paled in comparison to the importance of American prestige.

In his deliberately ponderous Germanic accent, Kissinger spoke softly as he wielded the big stick of American bombing. It didn’t work then, nor is it working today for those who still worship at the altar of Kissinger’s Realpolitik.