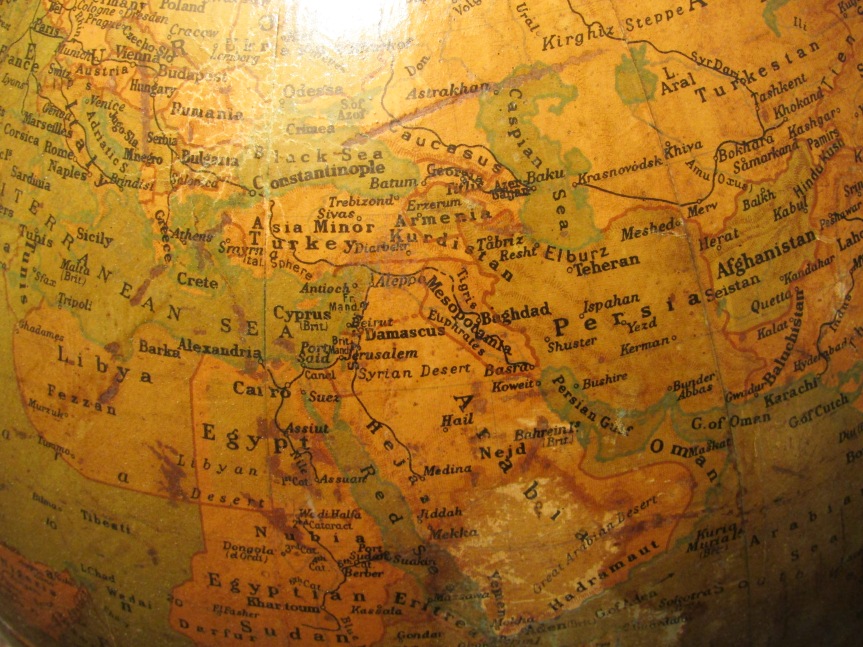 How about a contrary perspective on the Middle East, courtesy of my old globe?  It dates from the early 1920s, just after World War I but before Russia became the Soviet Union.  Taking a close look at the Middle East (a geographic term that I use loosely), you’ll notice more than a few differences from today’s maps and globes:

My fellow Americans, one statement: The idea that America “must lead” in this area of the world speaks to our hubris and ignorance.  We are obviously not seen as impartial.  Our “leadership” is mainly expressed by violent military action.

But we just can’t help ourselves.  The idea of “global reach, global power” is too intoxicating.  We see the globe as ours to spin.  Ours to control.

Perhaps old globes can teach us the transitory nature of power.  After all, those British and French mandates are gone.  European powers, however grudgingly, learned to retrench.  (Of course, the British and French, together with the Germans, are now bombing and blasting old mandates in the name of combating terrorism.)

I wonder how a globe made in 2115 will depict this area of the world. Will it look like today’s globe, or more like my globe from c.1920, or something entirely different?  Will it show a new regional empire or more fragmentation?  An empire based on Islam or a shattered and blasted infertile crescent ravaged by war and an inhospitable climate driven by global warming?

Readers: I welcome your comments and predictions.