It’s hard to think of a higher priority than the prevention of doomsday. Global catastrophe could strike in quick-time via nuclear war, or in slow-motion via global warming. Yet our leaders persist in rattling and sharpening the nuclear saber while denying the very reality of global warming (even as state-size chunks of ice break off from the polar ice caps).

Global catastrophe: What, me worry? It’s a MAD world indeed. 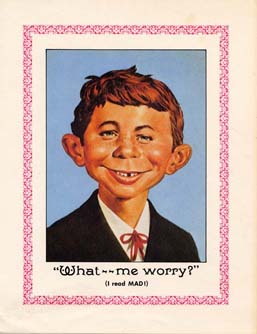 Today at TomDispatch.com, I return to my days working in Cheyenne Mountain, America’s nuclear command and control center, tunneled out of a massive granite mountain in Colorado. I argue that it’s time to overcome our lockdown, shelter-in-place, mentality, before that fear-filled mindset leads us all to catastrophe. You can read the entire article here. What follows is an excerpt:

Remember those old American Express card commercials with the tag line “Don’t leave home without it”?  If America’s Department of Homeland Security had its own card, its tag would be: “Don’t leave home.”

Consider the words of retired General John Kelly, the head of that department, who recently suggested that if Americans knew what he knew about the nasty terror threats facing this country, they’d “never leave the house.”  General Kelly, a big bad Marine, is a man who — one would think — does not frighten easily.  It’s unclear, however, whether he considers it best for us to “shelter in place” just for now (until he sends the all-clear signal) or for all eternity.

One thing is clear, however: Islamic terrorism, an exceedingly modest danger to Americans, has in these years become the excuse for the endless construction and funding of an increasingly powerful national security state (the Department of Homeland Security included), complete with a global surveillance system for the ages.  And with that, of course, goes the urge to demobilize the American people and put them in an eternal lockdown mode, while the warrior pros go about the business of keeping them “safe” and “secure.”

I have a few questions for General Kelly: Is closing our personal blast doors the answer to keeping our enemies and especially our fears at bay?  What does security really mean?  With respect to nuclear Armageddon, should the rich among us indeed start building personal bomb shelters again, while our government continues to perfect our nuclear arsenal by endlessly updating and “modernizing” it?  (Think: smart nukes and next generation delivery systems.)  Or should we work toward locking down and in the end eliminating our doomsday weaponry?  With respect to both terrorism and immigration, should we really hunker down in Homeland U.S.A., slamming shut our Trumpian blast door with Mexico (actually long under construction) and our immigration system, or should we be working to reduce the tensions of poverty and violence that generate both desperate immigrants and terrorist acts?

President Trump and “his” generals are plainly in favor of you and yours just hunkering down, even as they continue to lash out militarily around the globe.  The result so far: the worst of both worlds — a fortress America mentality of fear and passivity domestically and a kinetic, manic urge to surge, weapons in hand, across significant parts of the planet.

Call it a passive-aggressive policy.  We the people are told to remain passive, huddling in our respective home bunkers, sheltering in place, even as America’s finest aggressively strike out at those we fear most.  The common denominator of such a project is fear — a fear that breeds compliance at home and passivity before uniformed, if often uninformed, experts, even as it generates repetitive, seemingly endless, violence abroad.  In short, it’s the doomsday mentality applied every day in every way.

Thirty years ago, as a young Air Force officer, Cheyenne Mountain played a memorable role in my life.  In 1988 I left that mountain redoubt behind, though I carried with me a small slab of granite from it with a souvenir pen attached.  Today, with greying hair and my very own time machine (my memories), I find myself returning regularly to Cheyenne Mountain, thinking over where we went wrong as a country in allowing a doomsday-lockdown mentality to get such a hold on us.

Amazingly, Barack Obama, the president who made high-minded pleas to put an end to nuclear weapons (and won a Nobel Prize for them), pleas supported by hard-headed realists like former Secretaries of State Henry Kissinger and George Shultz, gave his approval to a trillion-dollar renovation of America’s nuclear triad before leaving office.  That military-industrial boondoggle will now be carried forward by the Trump administration.  Though revealing complete ignorance about America’s nuclear triad during the 2016 election campaign, President Trump has nevertheless boasted that the U.S. will always be “at the top of the pack” when it comes to doomsday weaponry.  And whether with Iran or North Korea, he foolishly favors policies that rattle the nuclear saber.

In addition, recent reports indicate that America’s nuclear arsenal may be less than secure.  In fact, as of this March, inspection results for nuclear weapons safety and security, which had been shared freely with the American public, are now classified in what the Associated Press calls a “lockdown of information.”  Naturally, the Pentagon claims greater secrecy is needed to protect us against terrorism, but it serves another purpose: shielding incompetence and failing grades.  Given the U.S. military’s nightmarish history of major accidents with nuclear weapons, more secrecy and less accountability doesn’t exactly inspire greater confidence.

Today, the Cheyenne complex sits deactivated, buried inside its mountain, awaiting fresh purpose.  And I have one.  Let’s bring our collective fears there, America.  Let’s bury them under all that granite.  Let’s close the blast doors behind us as we walk out of that dark tunnel toward the light.  For sheltering in place shouldn’t be the American way.  Nor should we lock ourselves down for life.  It would be so much better to lockdown instead what should be truly unthinkable: doomsday itself, the mass murder of ourselves and the destruction of our planet.