In my latest article for TomDispatch.com, I talk about militarism in the USA, a subject that’s been on my mind ever since President George W. Bush hid behind the bemedaled chest of General David Petraeus in 2007.  Here’s an excerpt from my article:

Besides TV shows, movies, and commercials, there are many signs of the increasing embrace of militarized values and attitudes in this country. The result: the acceptance of a military in places where it shouldn’t be, one that’s over-celebrated, over-hyped, and given far too much money and cultural authority, while becoming virtually immune to serious criticism.

Let me offer just nine signs of this that would have been so much less conceivable when I was a young boy watching reruns of Dragnet:

1. Roughly two-thirds of the federal government’s discretionary budget for 2020 will, unbelievably enough, be devoted to the Pentagon and related military functions, with each year’s “defense” budget coming ever closer to a trillion dollars. Such colossal sums are rarely debated in Congress; indeed, they enjoy wide bipartisan support.

2. The U.S. military remains the most trusted institution in our society, so say 74% of Americans surveyed in a Gallup poll. No other institution even comes close, certainly not the presidency (37%) or Congress (which recently rose to a monumental 25% on an impeachment high). Yet that same military has produced disasters or quagmires in Afghanistan, Iraq, Libya, Syria, Somalia, and elsewhere. Various “surges” have repeatedly failed. The Pentagon itself can’t even pass an audit. Why so much trust?

3. A state of permanent war is considered America’s new normal. Wars are now automatically treated as multi-generational with little concern for how permawar might degrade our democracy. Anti-war protesters are rare enough to be lone voices crying in the wilderness.

4. America’s generals continue to be treated, without the slightest irony, as “the adults in the room.” Sages like former Secretary of Defense James Mattis (cited glowingly in the recent debate among 12 Democratic presidential hopefuls) will save America from unskilled and tempestuous politicians like one Donald J. Trump. In the 2016 presidential race, it seemed that neither candidate could run without being endorsed by a screaming general (Michael Flynn for Trump; John Allen for Clinton).

5. The media routinely embraces retired U.S. military officers and uses them as talking heads to explain and promote military action to the American people. Simultaneously, when the military goes to war, civilian journalists are “embedded” within those forces and so are dependent on them in every way. The result tends to be a cheerleading media that supports the military in the name of patriotism — as well as higher ratings and corporate profits.

6. America’s foreign aid is increasingly military aid. Consider, for instance, the current controversy over the aid to Ukraine that President Trump blocked before his infamous phone call, which was, of course, partially about weaponry. This should serve to remind us that the United States has become the world’s foremost merchant of death, selling far more weapons globally than any other country. Again, there is no real debate here about the morality of profiting from such massive sales, whether abroad ($55.4 billion in arms sales for this fiscal year alone, says the Defense Security Cooperation Agency) or at home (a staggering 150 million new guns produced in the USA since 1986, the vast majority remaining in American hands).

7. In that context, consider the militarization of the weaponry in those very hands, from .50 caliber sniper rifles to various military-style assault rifles. Roughly 15 million AR-15s are currently owned by ordinary Americans. We’re talking about a gun designed for battlefield-style rapid shooting and maximum damage against humans. In the 1970s, when I was a teenager, the hunters in my family had bolt-action rifles for deer hunting, shotguns for birds, and pistols for home defense and plinking. No one had a military-style assault rifle because no one needed one or even wanted one. Now, worried suburbanites buy them, thinking they’re getting their “man card” back by toting such a weapon of mass destruction.

8. Paradoxically, even as Americans slaughter each other and themselves in large numbers via mass shootings and suicides (nearly 40,000 gun deaths in 2017 alone), they largely ignore Washington’s overseas wars and the continued bombing of numerous countries. But ignorance is not bliss. By tacitly giving the military a blank check, issued in the name of securing the homeland, Americans embrace that military, however loosely, and its misuse of violence across significant parts of the planet. Should it be any surprise that a country that kills so wantonly overseas over such a prolonged period would also experience mass shootings and other forms of violence at home?

9. Even as Americans “support our troops” and celebrate them as “heroes,” the military itself has taken on a new “warrior ethos” that would once — in the age of a draft army — have been contrary to this country’s citizen-soldier tradition, especially as articulated and exhibited by the “greatest generation” during World War II.

What these nine items add up to is a paradigm shift as well as a change in the zeitgeist. The U.S. military is no longer a tool that a democracy funds and uses reluctantly.  It’s become an alleged force for good, a virtuous entity, a band of brothers (and sisters), America’s foremost missionaries overseas and most lovable and admired heroes at home. This embrace of the military is precisely what I would call soft militarism. Jackbooted troops may not be marching in our streets, but they increasingly seem to be marching unopposed through — and occupying — our minds.

Update (10/25/19): Speaking of militarization, let’s not forget the popularity of video games (or “shooter” games) such as Call of Duty.  And with Halloween coming, who can resist costumes such as this (photo taken by a military friend): 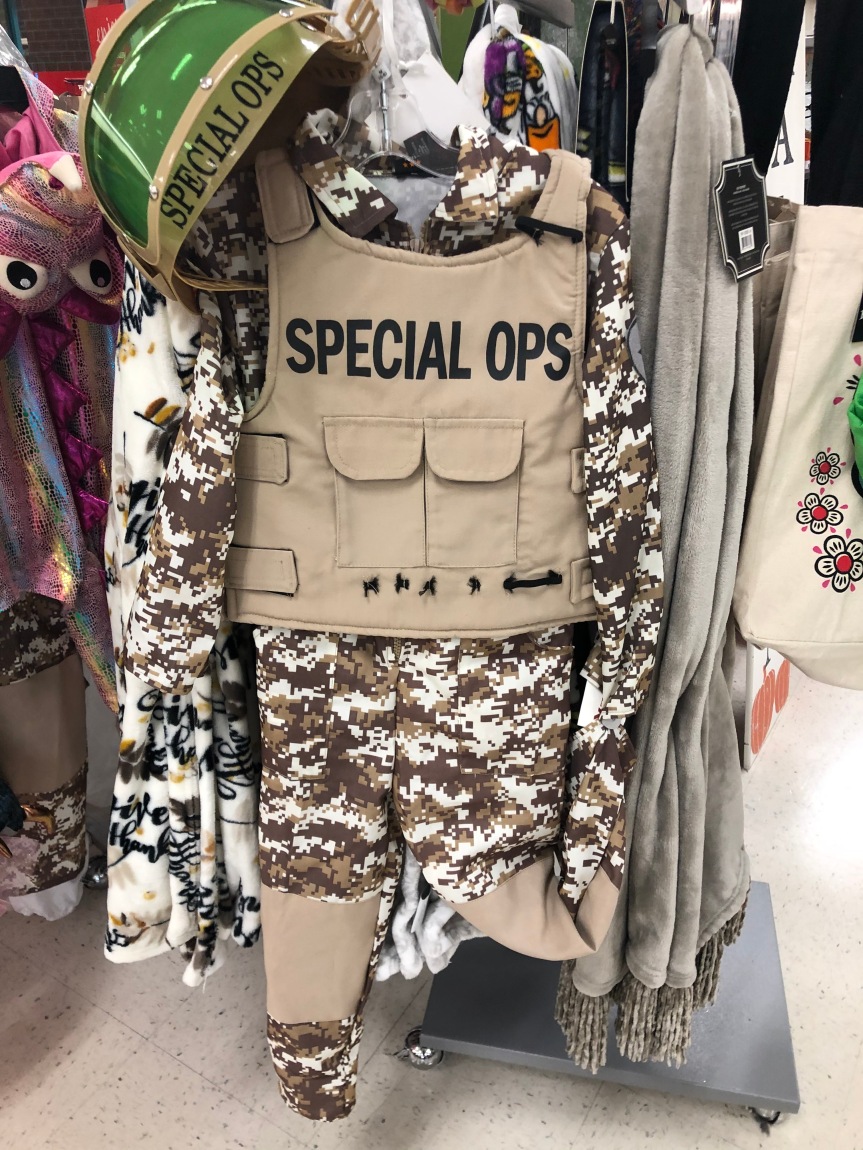 You thus have war reduced to a game and a costume party.  Welcome to Amerika!