The historian Jill Lepore has an interesting article at The New Yorker on dystopic novels and their popularity today.  Dystopias are all the rage, which is not surprising given the politics of fear that rules us.

Consider the stark contrast between the Republican Party of today versus that of the 1980s.  Remember the sunny optimism projected by Ronald Reagan?  The idea it’s “morning again” in America?  Now we have the dystopia of Trump.  Mexicans are rapists!  Muslims are terrorists!  They’re coming to get us!  Build a wall!  Torture and kill them!

I’m not suggesting Reagan was a saint.  Reagan was, however, a gifted communicator and an inspiring symbol for many. There was substance there as well.  As a young man, he served as a lifeguard and helped to save lives.  I find it intriguing that he was somewhat of an introvert, somewhat of a dreamer.  He worked with the Soviets and Mikhail Gorbachev on the elimination of nuclear weapons, a dream that did not come to pass.  For all his flaws, there was a fundamental decency about him.

Contrast Reagan to Trump.  With Trump, it’s all about him.  Trump’s favorite way of communicating is with insults, bluster, threats, and tweets.  Reagan dreamt of eliminating nuclear weapons; Trump insists America will remain “at the top of the [nuclear] pack,” at a cost of a trillion dollars over the next generation.

Reagan and his wife Nancy were quirky as well (astrology, anyone?), but seeing how they looked at each other and treated one another, no one could doubt their love.  Trump and Melania?  In public, at least, they come across as ill at ease, uncomfortable with each other.  Small potatoes, perhaps, but part of being the “First Family” is projecting harmony, or so it has been in the past.  Nowadays, such symbolism seems unimportant as Trump himself dominates the scene, his wife seemingly a bit player in his life. 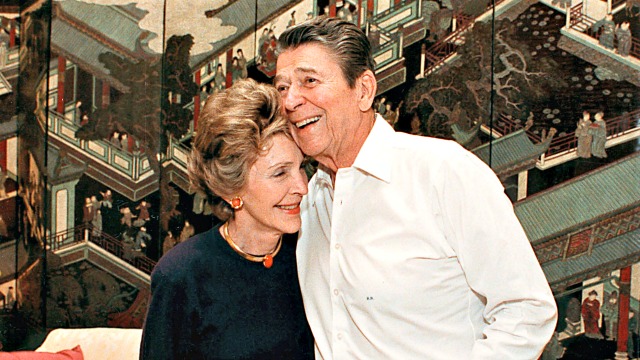 There’s a toxicity to Trump that’s consistent with the emergence of all these dystopic novels.  The Victorian author Samuel Smiles once wrote that a man should be what he seems or purposes to be.  By this Smiles meant that a man must demonstrate, by his behavior, uprightness of character.  A quaint expression, that.  When people think of Trump today, “uprightness of character” doesn’t exactly spring to mind.  Rather the reverse.

Though I wrote early on that Donald Trump had a serious chance at the presidency, by early November of last year I thought the negativity of his message – his bundle of hate – would not prove compelling enough to carry him to victory.  I was wrong, of course.  Trump, with his dystopic rhetoric as well as his actions, captured as well as amplified a prevailing mood.

It’s not morning again in America.  Under Trump, darkness and dystopia prevail.