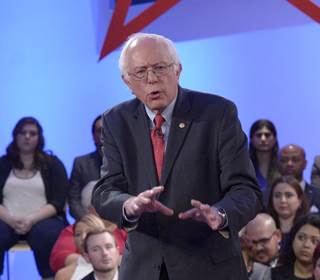 Last night’s town hall in Nevada revealed a crucial difference between Bernie Sanders and Hillary Clinton.  Bernie came out strongly for a $15 per hour minimum wage.  A living wage, as he called it.  Hillary demurred, suggesting that $12 per hour was sufficient, though she mentioned municipalities with higher minimums (places like San Francisco, which have a very high cost of living).

An extra $3.00 and hour, for 40 hours a week, for 50 weeks a year, is an extra $6000 in the pockets of workers (before taxes, of course).  For many working families, that’s the difference between struggling in poverty and making enough to live with a modicum of security.

Hillary went unchallenged on her $12 per hour figure.  But let’s remind ourselves that Hillary made $675,000 for three speeches to Goldman Sachs.  A person working for Hillary’s “generous” $12 wage would need 28 years to match what she made in three speeches that took her all of a few hours to make.

Indeed, Hillary’s “minimum wage” for her speeches to big banks and Wall Street is in the neighborhood of $100,000 to $200,000 per hour.  “Hey, that’s what they offered,” Hillary said.  And so Hillary is offering you, sales associate at Walmart, $12 per hour.  Are you not entertained?

When asked if she’d release transcripts of her speeches to the Wall Street banks and investment houses, Hillary essentially said no.  Of course, she didn’t say “no” because that would be honest.  Instead, she said she’d release her transcripts if all the other candidates did the same.  She knows that’s not happening, so her answer is no.

Perhaps Hillary could contact Goldman Sachs and ask them to start inviting workers to give speeches at her going rate.  A lot of American working families would deeply appreciate making $225,000 for a couple of hours of sharing their hard-won experiences with Wall Street bankers and investors.

3 thoughts on “Bernie is More Generous to Workers than Hillary”